You are here: Home / Blog / SSD VS HDD for Gaming | Which One is Best? 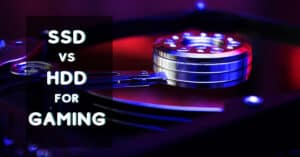 The storage war is never over between SSD vs HDD for gaming. As solid-state drives have lowered in price over the last couple of years, more and more gamers are shifting from old traditional hard drives to SSD to store their favorite games.

According to Game Benchmark:

Here are a lot of performance gains of choosing an SSD over a conventional mechanical hard drive. The faster read and write times of an SSD help it load large files quicker and cut down boot times into your operating system and the programs and applications on your computer.

Also Read, Gaming Laptop Vs Desktop | Which One Is Better?

However, in terms of in-game performance, an SSD will not provide any significant performance advantage. In the testing that I’ve done and the benchmarks that I’ve seen, the results show that the difference between a solid-state drive and a hard drive in games is negligible. The reality is that games installed on an SSD will not deliver you more frames per second than if those games were installed on a hard drive; all other things equal.

While SSDs won’t give you higher frame rates, that doesn’t mean that they are useless for gamers here comparing SSD VS HDD on all fronts.

SSD is faster than HDD; the reason is that the solid-state nature of SSD storage gives it a considerable speed advantage over the mechanical design of HDD storage. A standard SSD can read sequential data at about 550 megabytes per second (MBps) and write it at 520 MBps.

In contrast, a fast HDD may carry out sequential reads and writes at just 125MBps. Latency is also a very important factor in gaming that is described as delay; the amount of time a signal (or data packets) takes to proceed information from one point to the next.

SSDs are more durable due to a lack of moving parts. On the other hand, HDDs are subject to breakdown and physical damage simply because of the mechanisms that their functioning relies on.

HDDs tend to last longer than SSDs, an SSD can last upwards of 5 years, and HDDs can easily last for over ten years.

When it comes to maximum capacity, both SSDs and HDDs that go as high as 8 TB, or even higher, can be found on the market today. However, a more important thing to consider is the price-capacity ratio. HDDs are roughly four times cheaper than SSDs when it comes to storage.

For example, a 50$ hard drive will have 1 TB of storage space, while a similarly-priced SSD will only have about 250GB. The situation is similar on the other end of the spectrum.  An 8TB HDD will cost you about 300$, while a 4+ TB SSD would cost thousands.

As we have already stated, a solid-state drive has no moving parts. As such, it runs completely silent. Conversely, an HDD is bound to produce a certain amount of noise, but not every HDD is as loud as another.

Because SSDs weigh less than hard drives, they are more mobile-friendly, making your laptop lighter and more comfortable to carry. With lightweight components and solid construction, SSDs are better suited for the rigors of constant travel.

SSD is Easy to install other than HDDs. The installation is the most challenging task, especially for those who don’t know much about it. So why not opt for the one that saves you from many hustles?

These fundamental differences between SSD vs HDD for gaming will make your mind up in the right direction. You would be able to make up the right and robust choice.

Check out the Best Gaming Laptops Under 1500 Dollars Here.

Yourgadgetschoice.com is a member of an Amazon Affiliate Advertising Program and Services LLC Associate Program that is aimed to provide reviews of the products and earn charges by connecting the Amazon.com and the affiliated sites.